Numbers 22:12, 23:8-10, 20-24 (NLT) is a fascinating account in the history of the Jews as they travelled from Egypt to the Promised land of Canaan. At this stage in their course, they were at the plains of Moab, whose monarch was Balak. Balak and his subjects were so scared of the Jews that he solicited a witch or a sangoma (South Africa) or mchawi or mganga (Kenya) to curse the Jews. Apparently, he was so excellent at it that whoever he blessed got blessed and whoever he cursed got cursed. (22:6)

This story is fascinating in so many levels.

First, God appears to this witch and briefs him on what to do. This is mind-boggling to religious people. How can a holy God talk to a sinner? And a sinner of this magnitude? This is the truth—God only has sinners to talk to. God talks with sinners. He did it with Cain soon after he had murdered his brother, Abel. (Genesis 4:9) God talks with sinners, even today. Christian, how do you think you got saved if you didn’t hear God’s voice through the preacher? Romans 10:14 (NLT) Hey, God talks with sinners.

Second, the blessing on the Jews. God ordered this witch was not to curse the people because they were blessed. (22:6) Notice the present tense? Blessed. The Hebrew word for blessed is Barak, which means to delight in, to invoke prosperity upon, to love, cherish, to wish only good, to bless, to cause to flourish, to cause to abound in blessings.

And then this Barak was irreversible. (23:20). It was permanent. Wow. Settled. Nothing could alter the blessing on these people.

As Balaam looks out from his vantage position, he sees the evidence of the blessing. This time he sees as through God’s eyes and he sees. 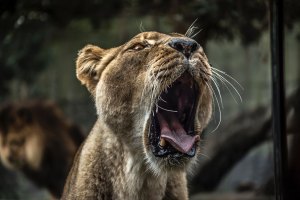 “No misfortune is in his plan for Jacob; no trouble is in store for Israel. For the Lord their God is with them; he has been proclaimed their king. God brought them out of Egypt; for them he is as strong as a wild ox. No curse can touch Jacob; no magic has any power against Israel. For now it will be said of Jacob, ‘What wonders God has done for Israel!’ These people rise up like A LIONESS, like a majestic lion rousing itself. They refuse to rest until they have feasted on prey, drinking the blood of the slaughtered!” (23:21-24)

Wow! Balaam saw them as God saw them.

Hey, wait a minute! Do you know who these people are? If you are familiar with the Bible narrative, you know these people were a pain in God’s posterior. They were often complaining, bickering, griping, arguing, doubting, plotted coups, and indeed worshipped an idol on the day they received the Big 10. Of course, the people down in the plains weren’t perfect. Not at all. Yet Balaam saw them from a different lens.

Why were these people blessed? Balaam’s chants and invocations didn’t work. Why?

Come. See. Jesus (the tagline or slogan of our soon to be launched community)

If a theological framework or lens of interpreting the Bible text is to reveal who Jesus is, and what he did for us, where is Jesus in this story?

Let’s uncover Jesus in this story.

Jesus is hiding in plain sight within the camps of Israel. The Jews offered every morning and evening as a sacrifice on behalf of the people, two lambs—one at 9 am and the other at 3 pm. (Exodus 29:38-46) God would then bless the nation of Israel because of these sacrifices. By the time Balaam rose to curse them, they had already offered at least one sacrifice. The result was God had imputed the innocence of the lambs to the sinful nation of Israel. They were righteous. God was with them. (23:21) God could live among sinners.  This is the blessing.

Now, theologically speaking, a question arises. If this blessedness happened to Jews who were under the Old Covenant, how about we who are under the New Covenant? The answer? The blessedness we enjoy is transcendent to what they had. It is on a cosmic level.

We all crave for approval from someone apart from us. We crave approval from parents, peers, politicians, leaders, spouses, religion, employers, careers, qualifications, titles, wealth, etc. It is an intrinsic need. We want Barak. We want someone to delight in, to invoke prosperity upon, to love, cherish, to wish us only good, to bless us, to cause us to flourish, to cause us to abound in blessings. We seek for it. We do everything in our power to have it.  Away with this modern notion, you shouldn’t care what others think of you; or you shouldn’t seek approval from people. This is a fallacy. It is an intrinsic need in every one of us to crave for approval.

Other worldviews that claim the existence of a god or gods (theism) claim you have to do some things to be approved by a god or gods. Judaism teaches that you have to obey the Ten Commandments for Yahweh to bless you. Islam teaches you have to diligently follow the Five Pillars for Allah to bless you. Hinduism teaches you that to attain to blessedness you have to be one with Infinite Ultimate Reality (an Impersonal being). Buddhism teaches if you follow the Noble Eightfold Path—a comprehensive practical guide to the development of these wholesome qualities and skills in the human heart that must be cultivated to bring the practitioner to the final goal, namely, the supreme freedom and happiness of Nibbana. The postmodern worldview teaches us to apply principles; follow these steps, keys; you are the captain of your ship and master of your destiny; you are responsible for your own happiness, etc.

One common feature in all these worldviews is YOU—You have to do something—Follow a path; Obey the Ten Commandments; Follow a spiritual guide; Live according to the five pillars; Apply principles; Follow these steps; You are responsible. It’s all up to YOU! What a disconcerting and frightening thought!

Non-Christian, this is so simple it sounds stupid—that someone else already secured your approval and blessing for you. Hey, put your tools and weapons down and consider this idea. What if it all this were true?

Photo by Samuel Scrimshaw on Unsplash